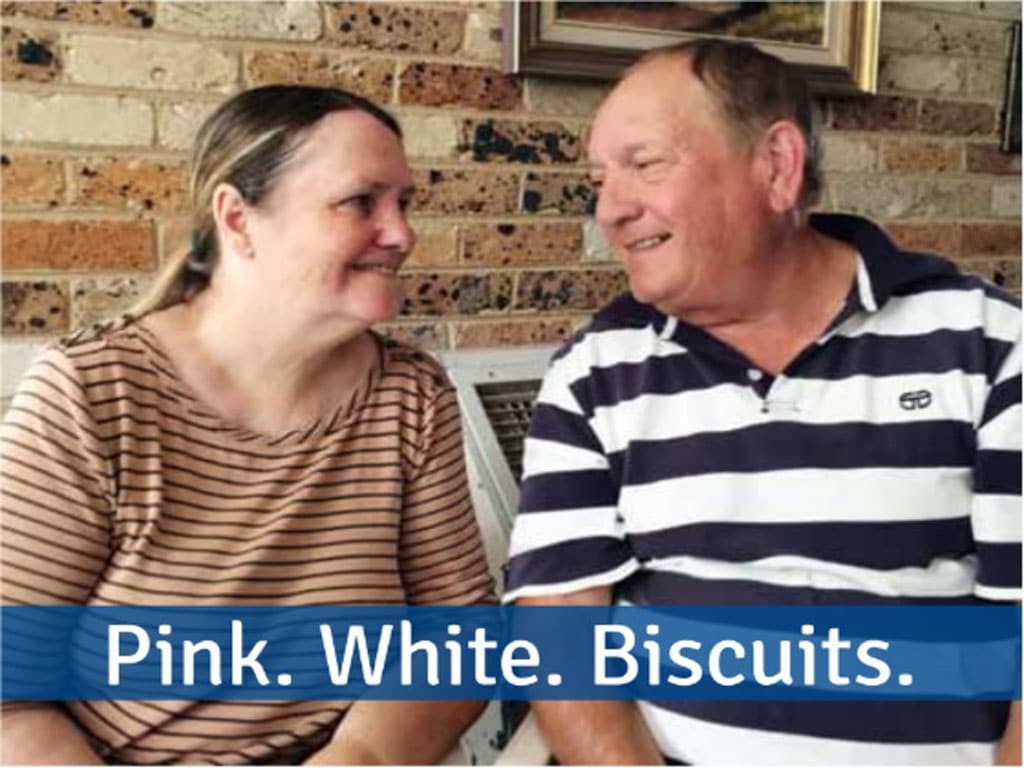 “Pink. White. Biscuits” A stroke survivor’s determination to get what she wants

In recognition of the International Communication Project 2014, speech pathologist Mimi Naylor celebrates the achievements of her client Christine and husband Tom.

CHRISTINE LOVES DANCING and tells of a recent ballet rehearsal she went to: “gorgeous. Absolutely gorgeous. Slim men”. She gestures, “six-pack”. Her husband Tom rolls his eyes in response. The patter of conversation never ceases as they compete for the listeners’ attention, the dialogue flowing with scaffolded questions, conversational repair strategies, sound cues, animated gestures, and expressive facial expressions. What you’re really watching is the result of years of intensive speech pathology intervention.

Christine had her first stroke at 53, followed by a second stroke 18 months later, the latter greatly affecting her communication skills. I’ve worked with Christine for nearly two years as her speech pathologist. She is nearly always buoyant, with a bright personality whose slightly naughty sense of humour makes her utterly charming. She appeared as a guest as I lectured to second year speech students. She pointed to all 88 of them – “gorgeous. Gorgeous. Gorgeous. Beautiful girls. All of you. Thank you.” She was thanking them for studying speech pathology, for the difference it had made to her life. The students were at once charmed but stunned to think that their chosen profession would deserve such gratitude or could have this impact on someone’s life.

Tom tells that six years ago Christine was a different person. “Now she’s quite capable of having a conversation, being expressive and enjoying a good bit of social life. When she was first exposed to speech pathology, she just mimicked. Now she can generate and form words, sentences and answers, as her reasoning has also improved.” He looks to Christine to check he’s not doing too much talking for her. “Before it was a pretty dark hole situation, wasn’t it babe, and you’re still recovering. That’s the important thing. You’re still showing different improvements in different areas, which is a reflection of what you’ve been exposed to with your speech therapy.” Christine nods vehemently in agreement. One year ago, we decided Christine had allowed Tom to be her voice for long enough. Christine’s eyes darted to him in panic if she needed to communicate in public. Speech pathology supported her to practice useful key words and short phrases with various visual prompts. We role-played answering phone calls and ordering coffees. Using the practiced scaffolds, Christine approached a Big W staff member and through a combination of single words and gestures, asked directions to the kitchen aisle. Christine was jubilant. She exited the store with tea towels and hair clips. She had made an independent purchase for the first time in over four years! Tom would jokingly sigh that she was going to “bleed him dry” as Christine started to gain the confidence to approach staff for assistance in the post office, the bakery and the pharmacy, with interactions invariably leading to purchases.

You’re thinking Iced VoVos, aren’t you? Wrong. How would you find out what Christine was trying to tell you? Tom tried drawing some shapes and asking questions to no avail. He took Christine to Coles and together inspected the biscuit aisle with no luck. Christine then took matters into her own hands and approached an assistant. “Pink. White. Biscuits”, she said. “Not Coles, IGA”, the assistant replied, “you won’t find them here”. Christine’s ability and confidence to communicate effectively is testimony to the impact of collaborative working in speech pathology. Christine is an active participant in her life choices and has gained a sense of freedom towards that. Her conversations with Tom are two-way and meaningful, and through communication partner training, Tom has gained the skills to prompt, interpret, and seek alternative means to ‘converse’ with Christine. Yes, they did get their Honey Jumbles biscuits. Sweet success.

Please note this article has been edited to meet space requirements. Mimi, Christine and Tom submitted a full version of this story as part of the National Senate Inquiry in to the prevalence of different types of speech, language and communication disorders and speech pathology services in Australia. A full version can be seen on the Senate Inquiry website.

The greatest joy in life comes from the richness of our relationships with others. The core skills needed to build relationships are communication, clear speech, articulation, understanding language, using the right words to express oneself and the ability to negotiate. We also need to advocate, to ask for help, to reassure and encourage.