How speech pathology can treat a lisp 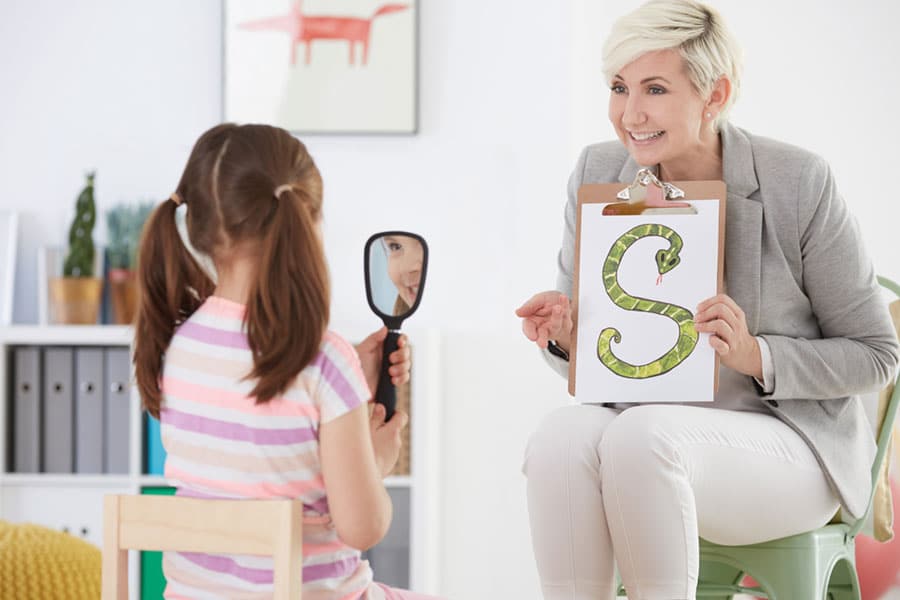 A lisp is one of the most common speech problems we work with in speech pathology.

What is a lisp?

A ‘lisp’ is a lay-term often used to describe difficulty achieving the correct placement of the tongue to create clear, easy to understand “s” and “z” speech sounds. This may or may not be accompanied by the tongue poking out.

A lisp most likely has a phonetic origin, meaning a child has a difficulty physically achieving the correct placement of their lips, tongue and/or jaw to create clear, easy to understand speech sounds. Fortunately, this does not mean we cannot fix it.

There may also be physiological factors contributing to a lisp. Ear Nose and Throat specialists (ENTs) are unable to rule out the contributions of enlarged tonsils at a young age or nasal obstructions (snuffly breathers or children with allergies) towards a lisp[2]. The reasoning behind this is that enlarged tonsils (whether infected of not) take up much of the space at the back of the throat where the base of the tongue would normally sit pushing the tongue into a more forward position. This can often be associated with ‘mouth breathing’, where the mouth may rest open rather than closed due to the position of the tongue. The same is true for children with nasal allergies or narrowing of the nasal passages as they may compensate by being mouth-breathers[3][4]. Parents will often tell us their child has a large tongue but this is rarely ever the case. These children do, however, appear to dribble more frequently. This may be due to them swallowing their saliva less frequently.

Orthodontists and Dentists agree that genetics plays a large role in the shape of your jaw and bite. However, the shaping of the jaw and subsequently the teeth positioning is also strongly influenced by the surrounding soft tissues and muscular forces of your tongue and lips and cheeks. So, a latent ‘tongue thrust’ where your tongue pushes forward slightly on swallowing can contribute to an ‘overbite’ where your top teeth are pushed further forward in relation to the lower teeth. In these children and adults we often also see ‘lisp’ speech behaviours. However, we have to treat the underlying tongue thrust behaviours first.

"There are four types of lisp: interdental, lateral, palatal and dentalised."

Then we have the dentalised lisp, which occurs when a child pushes the tip of their tongue up against their front teeth, resulting in a muffled “s” or “z” speech sound.

The palatal lisp is less common. A palatal lisp occurs when a child tries to say “s” and/or “z” speech sounds with the tongue touching the soft palate (the roof of the mouth).

When to seek help

Interdental lisps are common among children learning to talk. Both interdental and dentalised lisps can be a normal part of a child’s speech development, and resolve as the child matures. However, if you think your child has an interdental or dentalised lisp, and they are 4 ½ years of age or older, we recommend you contact us at Talkshop Speech Pathology.

In contrast to interdental and dentalised lisps, lateral and palatal lisps are not considered to be a normal part of a child’s speech development. If you think your child has a lateral or palatal lisp, and they are 4 years of age or older, we recommend you contact us at Talkshop Speech Pathology[5].

How we can help

Therapy for lisps involves teaching a hierarchy of skills. The hierarchy usually moves from your child saying the “s” and “z” speech sounds in isolation, to your child saying “s” and “z” independently in all contexts of their everyday life. The steps in between vary according to your child’s strengths and weaknesses, as do the techniques used to help your child understand what they are doing wrong and how to make it right at each step. Examples of techniques used include visual cues (e.g. modelling how the speech sound looks, using gestures to represent speech sounds), verbal cues (e.g. modelling how the speech sound sounds, providing verbal instructions), and tactile cues (e.g. showing the child where to place their lips/tongue/jaw using touch).

Therapy for tongue thrusts also involves teaching a hierarchy of skills. As tongue thrust is a learnt motor pattern (the pattern of movement our brain instructs our muscles to move in) it requires a period of therapy to out-train your child’s old habitual way of using their tongue for speech and swallowing. The way that your child uses their tongue for swallowing will need to be targeted before their interdental lisp can be targeted.

We always provide parent training within therapy sessions so that you feel confident completing home practice tasks with your child each week. This is a high priority for us as we know that frequency of practice is so important for your child’s progress.

Last but not least, therapy involves finding the right balance of challenging and fun to keep you and your child motivated.

If you are unsure if your child has a lisp, book in a free initial phone consultation or a face-to-face consultation at our Free Friday Community Clinic.

Our FREE Discovery Session is ideal for anyone with any questions relating to speech, stuttering, language, literacy, social skills, swallowing and voice.

This is an opportunity for us to give some information on how to monitor your concern and give you advice on how start self-managing any issues immediately.

Discovery Sessions can help you understand if an assessment or therapy is needed, how Speech Therapy would work and, if appropriate, help you book in.